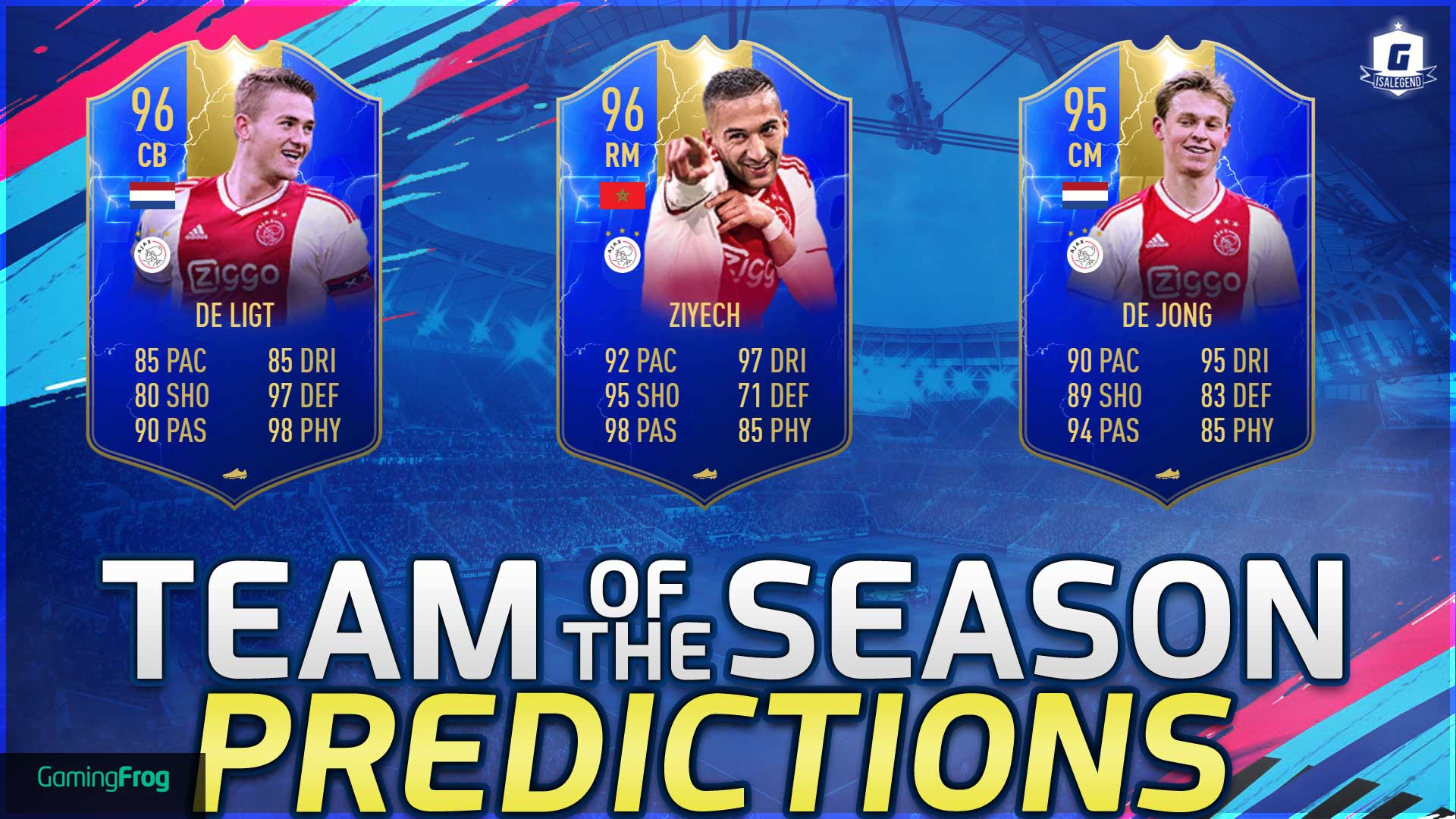 TOTS is inbound and with it some very nice cards to look forward to from Eredivisie for those who put in their hard work this season, from a number of regular faces to some new faces and returning players too. With this squad of 23, there is potential for other TOTS cards through objectives and SBCs, but for the purpose of this we are focusing on the main 23.

Andre Onana – GK – OVR 78 Onana is currently in the Most Consistent TOTS and we would imagine if Eredivisie feature that Onana will be re-released, what makes annoying though for people is that he’s been an Objective card and so forth already so a tradeable version of him could annoy a few folk.

Matthijs De Ligt – CB – OVR 83 De Ligt has been key at the back for Ajax as like Tadic, Ziyech and De Jong and seems set for a TOTS card we would assume his TOTS Card will be higher than his FFS Card and make him even more appealing.

Nicolas Tagliafico – LB – OVR 79 Tagliafico is another who is in most consistent and looks set to feature again for Eredivisie.

Denzel Dumfries – RB – OVR 73 Dumfries has made the defence his own at PSV and looks set for a TOTS Card as a result, due to his consistency with his league SBC Card too should be an increased boost on it.

Donny Van De Beek – CAM – OVR 76 Van De Beek has been 1 of the consistent cogs in this Ajax side as highlighted by multiple special cards, while others within the team or league may feature he deserves a TOTS though for his form all season despite regular transfer talk put on him.

Frenkie De Jong – CM – OVR 82 Another stand-out player with a transfer to Barcelona set for him, the highlight of his will be a TOTS Card, with a FFS Card already the TOTS should be even better.

Hakim Ziyech – RM – OVR 84 Ziyech has found himself a key cog in the Ajax team, with him rewarded with multiple special cards highlighted by his Headliners card the big question is what his rating will be and position as he’s been playing RM/CAM a lot this season.

Hirving Lozano – RW – OVR 82 Lozano has stood out yet again this season with an upgrade and several special cards too, while others may get the nod ahead, a TOTS version of him could be appealing for people.

Luuk De Jong – ST – OVR 78 De Jong has led the line standing out for PSV and as a result looks set for another TOTS card.

Dusan Tadic – ST – OVR 80 Tadic has stepped up well alongside Ziyech and De Jong at ST from CAM sometimes playing LW as highlighted by multiple special cards at ST, we’d assume if gets a TOTS Card will be at ST & could be an interesting card..

Marco Bizot  – GK – OVR 75 Bizot has been a difference maker as part of that defensive unit at AZ as they challenge for a  European place with considerable saves made as highlighted by an IF for him & looks set for a TOTS spot.

Angelino – LB – OVR 77 As with Dumfries, Angelino been consistent at the back and deserves a spot in at LB, but should have a strong shout featuring here and could be a neat addition at LB for hybrids due to nation and his upgrade too which may make him a cheap option.

Michel Vlap – CAM – OVR 70 Vlap has been running the Heereenveen midfield, challenging with a good balance of goals and assists to his name with a number of his performances have stood out been unlucky to not have an upgrade or IF by now, but looks set for a deserved TOTS Card.

Abdenasser El Khayati – CAM – OVR 73 El Khayati has been a key piece of the midfield/attack for Den Haag, he has been unlucky to not have any upgrades or boosts either but a TOTS Card is deserved.

Younes Namli – RW – OVR 73 One of PEC Zwolle’s key players who would be a cheap option as a winger is Namli, been 1 of their key players while others may get nod ahead, we’ve opted for him to get in could also be an SBC/Objective player.

Dalmau – ST – OVR 68 Dalmau has been a key part of Heracles attack and as a result led to an IF for him and nearly had at least one more that could have made his TOTS appealing as a cheap Spanish forward but could still get a decent boost.

Sam Lammers – ST – OVR 70 Lammers has been running the Heereenveen attack like with how Vlap has performed too, challenging with a good balance of goals and assists to his name with a number of his performances have stood out been unlucky to not have an upgrade or multiple IFs by now, but looks set for a deserved TOTS Card.

Janis Blaswich – GK- OVR 69 Blaswich has been impressive in net for Heracles as a result of their defensive displays, he has a chance of being the reserve GK and has been unlucky to not have had multiple special cards due to his performances.

Adam Maher- CM – OVR 72 Maher has been a key part of the AZ team creating goals and a number of goals scored himself, been unlucky to not have an upgrade or IF but a TOTS could be a cheap addition to some clubs.

Jerdy Schouten – CM – OVR 64 Schouten has been a key part of the Excelsior team despite their position, his performances have stood out all season, would be a cheap TOTS if happened but would be deserving due to his performances could be an objective or SBC Card.

Steven Berghuis – RW – OVR 79 Berghuis has been a key part of the Feyenoord Attack while others may get the nod over him, his efforts can’t be knocked at least in the league has an IF as shown and a TOTS boost could help further.

Robin Van Persie – ST – OVR 78 As with Berghuis, Van Persie has stood out this season as he retires, now he’s got an IF and End of an Era cards already, if gets a TOTS card could we see this go above and stand out even more. Potentially a 95 rated Van Persie would be mental but potentially be slightly under at 89 but who knows exactly.