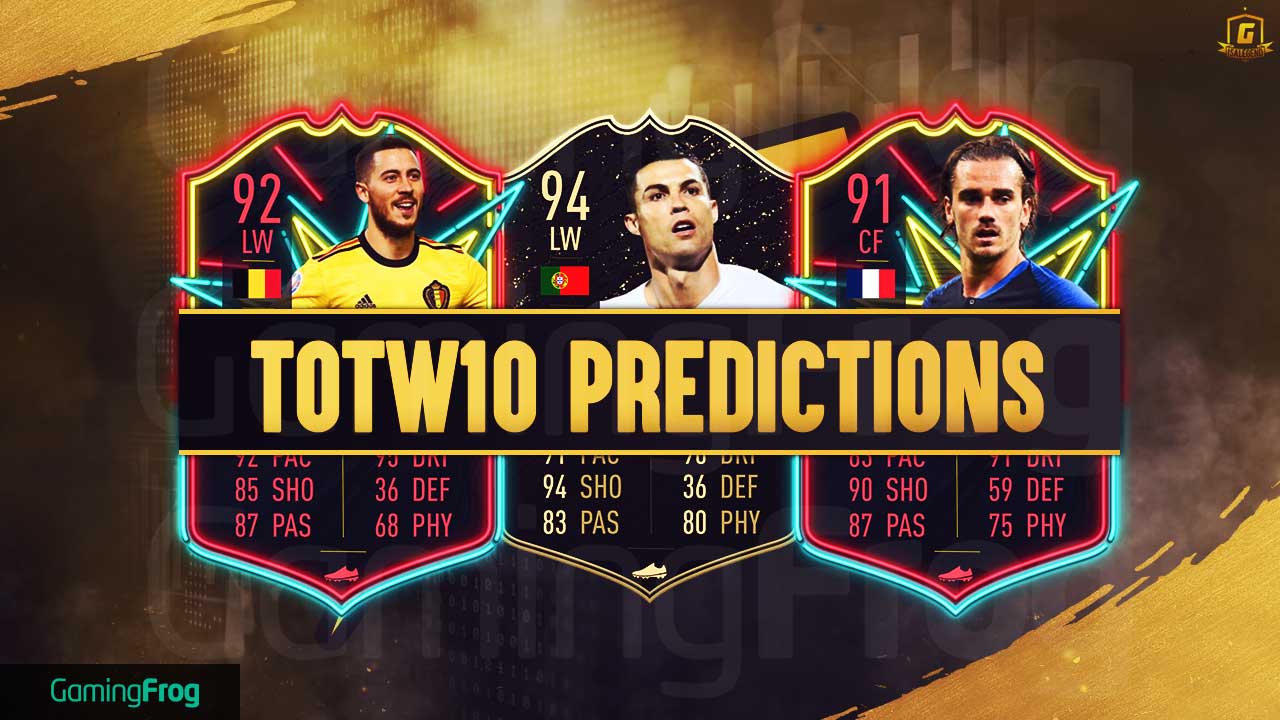 A return to form with 17. The big question is could this TOTW be the best yet?

Jan Oblak – GK – OVR 91 Goalkeepers this week is tough as Donnarumma & Neuer put in impressive performances but opted for a form GK in Oblak. As he made 4 saves during Slovenia’s 1-0 win over Latvia.

Ben Chilwell – LB – OVR 79 Chilwell looks set for a SIF but only problem  is Kane may happen from this game but with a number of standout performances is he got 3 assists and a clean sheet in their 7-0 win over Montenegro.

Francesco Acerbi – CB – OVR 83 Italy have been impressive over the international break and looks like 5-6 different players could happen, as Acerbi scored one and a clean sheet in the 3-0 away to Bosnia. From this game Belotti was MOTM for 1 goal and 1 assist with a 7.5 from Gazzetta and Donnarumma was a 7.5 in the game too.

Stefan Lainer – RB – OVR 77  Lainer was was involved in both Austrian goals with both a goal and an assist in Austria’s 2-1 win over North Macedonia.

Cristiano Ronaldo – LW – OVR 93 Ronaldo looks set for his first IF as he scored three of their six goals in a 6-0 home win over Lithuania.

Toni Kroos – CM – OVR 88 Germany came away with a 4-0 win at home to Belarus. Kroos looks set with two goals, 1 assist and a 1 from Kicker to his name but both Ginter and Neuer are also in with a shout from this game with 1.5 from Kicker.

Eden Hazard – LW – OVR 91 Hazard scored twice and assisted another as they went on to win 4-1 away at Russia and looks set for an IF.

Gerard Moreno – RM – OVR 81 Moreno looks set for a SIF in an impressive season so far after scoring once and assisting another three.

Antoine Griezmann – CF – OVR 89 Griezmann looks to feature after scoring once and assisting another in France’s 2-0 away win over Albania. With L’Equipe awarding him an 8/10 it looks as though the SIF is on the way, the alternatives for France could be Tolisso or Varane.

Harry Kane – ST – OVR 89 Kane scored three goals during their 7-0 demolition of Montenegro, which should see a SIF inbound.

Ciro Immobile – ST – OVR 86 Immobile ran riot but so did the entire team against Armenia winning 9-1, the big question is will a SIF for Immobile happen so soon after his RTTF Card, I will take the chance on it but do not be surprised to see Zaniolo, Orsolini or Chiesa get in too. Immobile scored twice and assisting another of the nine goals.

Tomeu Nadal – GK – OVR 73 Nadal putting in a performance which saw him make eight saves, including a penalty save to keep his clean sheet and as a result makes the TOTW.

Edson Mexer – CB – OVR 76 We head to Africa as Mexer was impressive in both games for Mozambique as he got 1 goal and a clean sheet in a win which is what he is in for, but in the 2nd game scored a goal in a draw, it’s due to him being a gold helps his chances.

Ole Selnaes – LM – OVR 77  Selnaes was influential in Norway’s 4-0 win, providing the assist on two of the goals only downside is he played LM instead of his usual CDM/CM, but Sorloth was impressive in this game too.

Harry Wilson – CAM – OVR 75 Wilson scored once and assisting another in their 2-0 away win over Azerbaijan and with a position change to CAM makes him a bit more appealing.

Robert Skov – RM- OVR 75 Eriksen may get the nod over Skov but we struggle to see past him who managed two goals and an assist from RM.

Teemu Pukki – ST – OVR 77 It appears the Pukki party has returned during the break as he scored twice to help lead them to a 3-0 home win this could be a hero as Finland qualified for the Euros for the 1st time and would also be underneath his POTM Card as an 81 & not an 86 rated card.

Victor Osimhen – ST – OVR 74 While Osimhen has a POTM already this IF will be cheap like that as he bagged 2 goals and 2 assists in a 4-2 win which should seal his spot in the TOTW.

Gyasi Zardes – ST – OVR 73 USA needed a big result after losing to Canada in the last international break but they made amends with Zardes scoring twice and claiming MOTM.

Famara Diedhiou – ST – OVR 72 Diedhiou joins the hat-trick club with his performance for Senegal which should seeing him join the TOTW.

Duvan Vergara – LW – OVR 67 Vergara joins the hat-trick club with his performance with this being in the Colombian league and is 1 of the few leagues in action we should seeing him join the TOTW.

Roy O’Donovan – ST – OVR 66 Rounding off the TOTW we have a member of the hat-trick club in O’Donovan but 2 of his goals were penalties during a 4-3 win but in the same game MacLaren scored all three of the opposing goals. So we could see none, 1 or both make the cut but opted for O’Donovan.