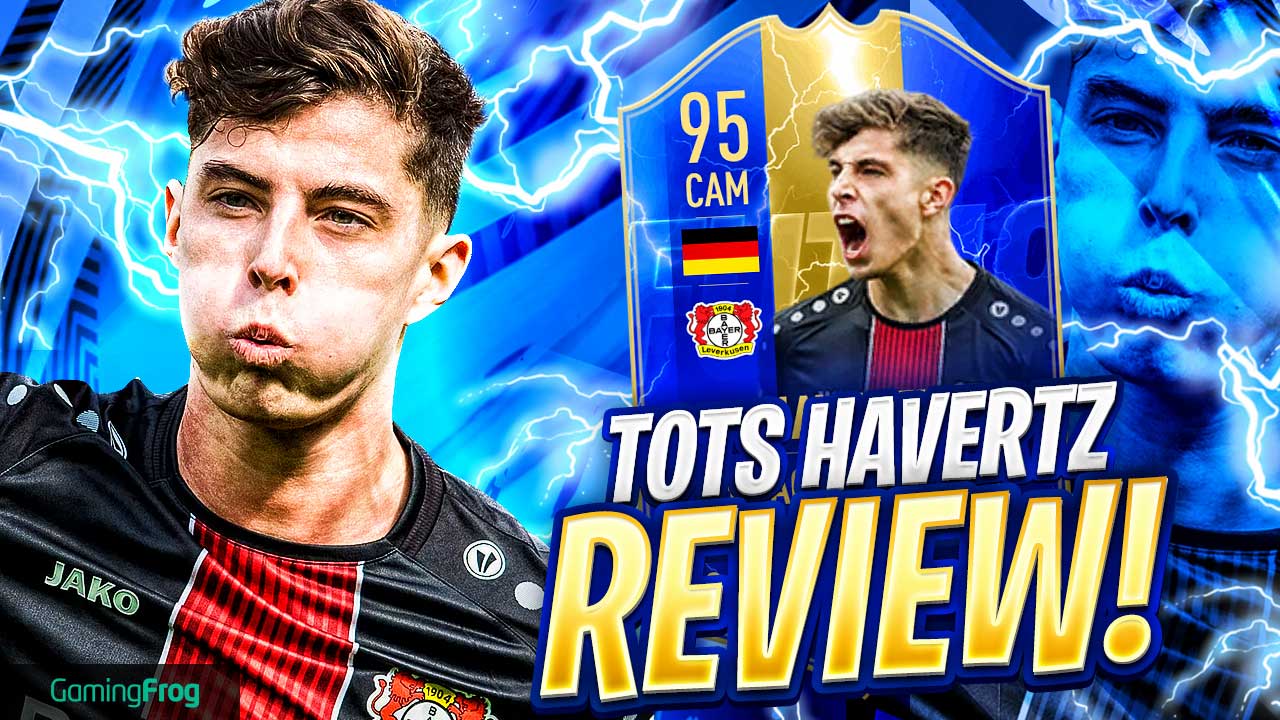 After obtaining 24 goal contributions (17 goals and 3 assists) in 34 appearances at the age of 19, Havertz was bound to get a Team Of The Season card through helping his club, Bayer Leverkusen, to finishing 4th in the league.

I was quite interested when this Team of The Season version of Havertz came out, as I had recently used his Future Stars item in FUT Draft, which I thought was decent, meaning that this new upgraded card could only be better! Personally, I don’t really like tall and clunky players in an attacking midfield area as it slows down my gameplay which is the opposite of my game style which is quick and fluid, however, Havertz proved me wrong and showed that he fits into this quick and fluid game style of mine.

This card being German and, in the Bundesliga, means that there aren’t that many squad possibilities, as you are really refined to linking Havertz with a Bundesliga player.

I feel as though around a 2,100,000 to 2,250,000 would be a fair price for this card. I think this as there is very high demand for the the card as he is being hyped up a lot by the fifa community, very good face stats, a good dynamic image and good weak foot and skills, however his links brings his price down a bit.

Height – Preferably when choosing a player for my team to play on the wing or in a central attacking midfield position, I like to have a small player so that they can make agile turns quickly and effectively against the opposition’s defender, and Havertz is the opposite of that. I was very sceptical to use this card in those positions as I didn’t think he would maximise his potential…however I tried it and Havertz turned out to be very agile and quick and strong and very good at winning headers!

Work Rates – Havertz  has medium/medium work rates which isn’t the best. Preferably for a winger, forward or an attacking midfielder you would look for high/medium or high/low work rates to help keep the player in the correct positions at the right time. This showed when I was using Havertz in an attacking midfielder position as sometimes he didn’t want to attack at some points, even on the counter attack, forcing me to slow down play for Sancho to make an automatic run or for me to personally trigger the run; which in some instances resulted in me not being able to get a goal within the game, but then in other instances allowed me to get a goal with Havertz, as shown in the clips.

Preferred Foot – Havertz is right footed and therefore he is more adapted to shoot with his right foot, if you like to shoot far post more often, then keep Havertz on the left, if you prefer to shoot near post, move Havertz to the right. When playing with Havertz I preferred using him on the left-hand side of the pitch as I felt he was more adapted/effective at scoring back post goals than near post goals. However when using this card both feet were both very effective at scoring, due to his great 5 star weak foot.

Weak Foot –Havertz has 5 star weakfoot, which is amazing for an attacking midfield player, Havertz was comfortable with scoring with both feet as shown In the highlights of me using him, and performed clean and crisp passes accurately to my players with both feet, allowing attacks to form quickly and effectively.

Skill Moves – Havertz has 4 star skill moves, which allows him to perform some good skills but not the best like 5 star skillers on the game, however the 4 star skill move trait is still very effective on the attack. I thoroughly enjoyed using skills with this Team of The Season version of Havertz in the box and outside of the box, causing good attacks and when in the box, the skills with the close ball control would normally lead to a goal!

Pace – Havertz has a face card stat of 93 pace, which feels just right as what it feels like in game! The 93 acceleration on the card isn’t really that noticeable in game, maybe as he is a tall and bulky player however the 93 sprint speed is very noticeable as he feels very quick in game, making it easy to make distance on opposing defenders

Shooting – Havertz always managed to find himself in the right position at the right time and that is reflected by his 99 attacking position stat, this was very effective in scoring well worked and scrappy goals and in well worked goals. His finishing on his right foot was sublime every time along with his left foot and it really reflected he 99 finishing, which I would say felt higher than 99,. The shot power was reflected well in game as the shots flew in even with 1 power bar against all keepers Havertz’s long shots were very consistent and quite accurate however lacked deadly accuracy, enough to get the ball past the keeper. The volleys 99 stat was immense and this was really emphasised by the 93 shot power making it very difficult for the keeper to save volleys. The one penalty I did take with Havertz was very smooth accurate and powerful which would also reflect his 95 composure, but not his 74 penalties stat, this felt a lot higher in game when taking the penalty! I preferred shooting normally with Havertz as these personally gave me more consistency with goal scoring as it complimented his high 93 shot power stat very well.

Passing – Havertz’s passing and vision was clearly evident as I cannot recall him missing a pass making it easier to create a counter attack, however his crossing stat at 87 felt a lot lower as they were often inaccurate and lacked power meaning a few chances were missed, he is better on the receiving end with his amazing 97 heading accuracy which complimented the high 93 shot power stat and the 97 jumping on a 6 foot 2 player very well allowing Havertz to convert many headed goals in difficult and easy situations in the game. Havertz’s free kick accuracy definitely didn’t reflect the 66 on his card, as they felt even worse, I was quite disappointed with that as this is the only really negative on the card.

Dribbling – Havrtz’s dribbling was a lot better than what I expected in game, his 98 dribbling and 98 ball control was reflected very well in game which made it feel easy to get past some of the best defenders in the game, such as Team of The Year Virgil Van Dijk, as you can see in the highlights! However the 86 balance was a let down on the dribbling as at points when doing skills it felt as if Havertz was going to fall over. The 93 reactions were really useful as Havertz would quickly notice an astray pass and be able to intercept it well. His composure stat of 95 really shows in game, scoring easy tap ins from a few yards out and good well worked goals in key situations.

Physical – Havertz in game felt a lot stronger than only having 85 strength as he managed to push off full backs when battling for the ball and even end game centre backs as strong as Team Of The Year Virgil Van Dijk as shown in some of the clips. The 94 stamina was very useful as in the dying moments of the game, Havertz still had enough fitness to run and perform his skills and good dribbling stats and win headers effectively and comfortably against defender. The aggression stat is not really noticeable and does not affect his play style.

Overall – I would not recommend buying this card at the moment because of his hefty price tag. However, if you have him untradeable I would 100% change your whole team around to fit him in as he is a massive gamechanger and could be the difference between you winning and losing a game. His key stats are his heading, finishing, passing, pace, physical, and dribbling. His only weakness is his free kicks, however that does not matter as you can change to another kick taker in your squad. One of the best all round cards I have used this year. I would suggest playing him as a Left or right attacking midfielder to get he maximum potential out of this amazing card!