The Seven Best Icons Under One Million Coins in FIFA 20

FIFA 20 Icon prices have changed a lot since the original date this article was published (Feb 11). Here is an updated list of the best 7 icons under 1 million in FIFA 20;

5 star Skills, 4 Star Week Foot. Jay Jay is the cheap Ronladinho alternative of FIFA 20, you can use him as CAM, with deadeye chemestry he has pretty decent shooting and his passing gets upgraded. If you like to have fun skilling this is the card for you. 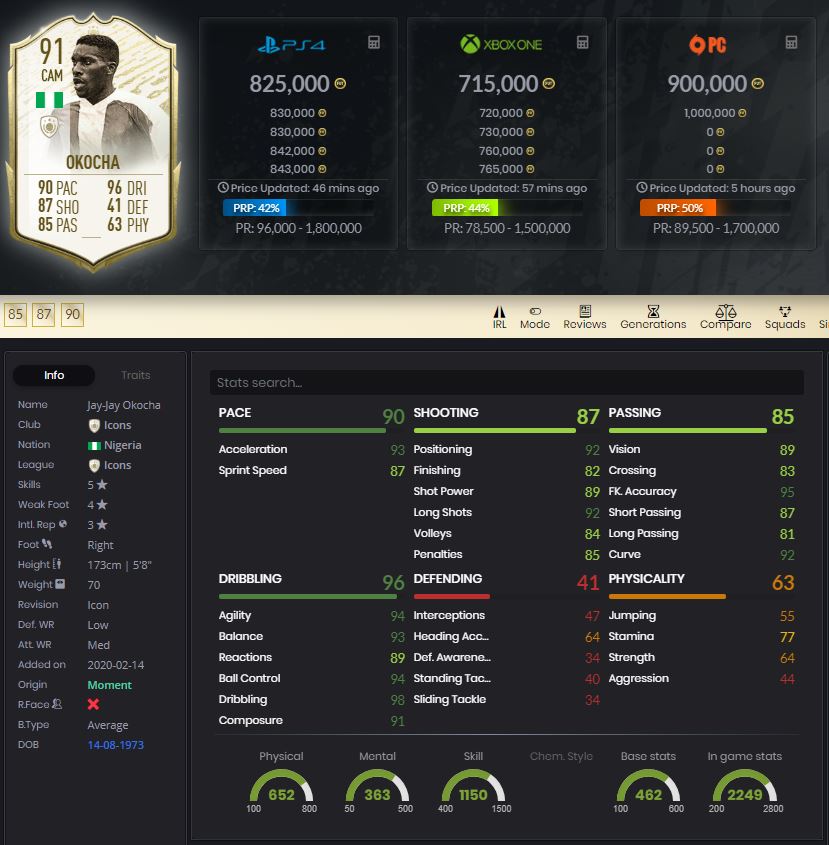 5 Star Skills, 4 Star Weak Foot, laser passing, increased stamina, decent shooting. Although pace is not there yet, with a shadow or hunter chemistry you can have either a great CAM or CM. I would play him a 4-3-3 (4) as a RCM with instructions to move up. 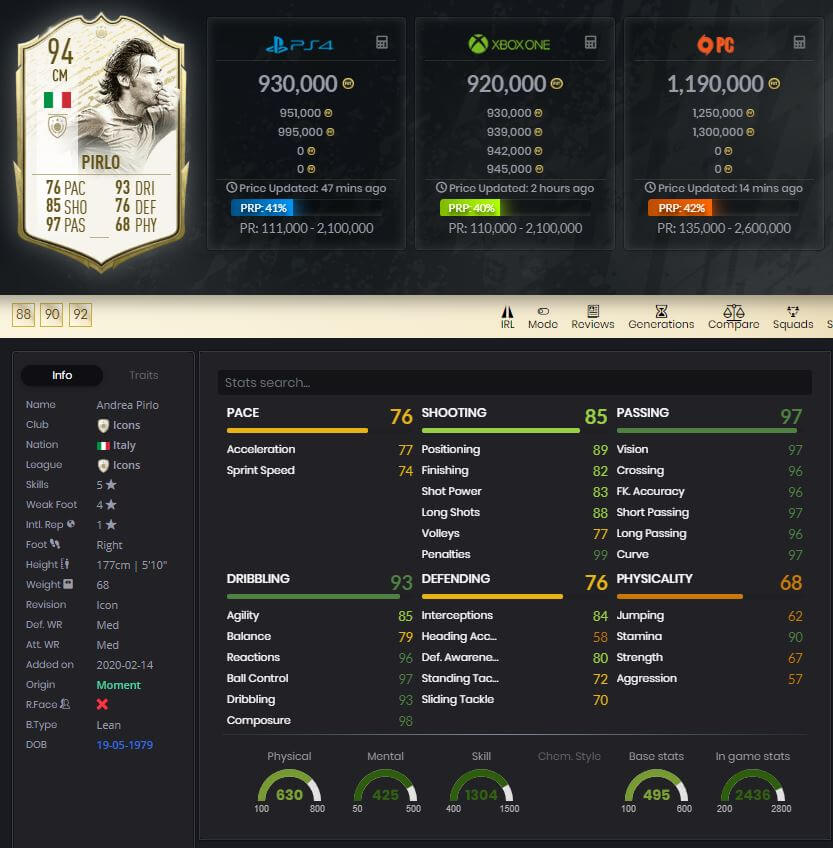 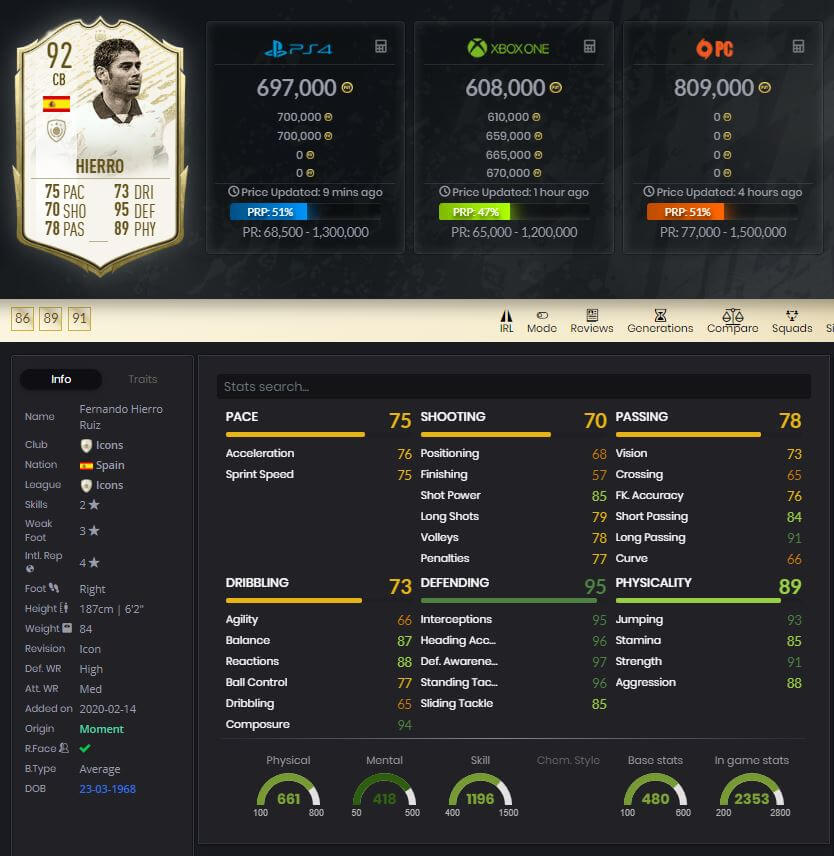 The Chelsea legend is part of Icon Swaps 3, he would make a great box to box player (RCM, LCM, CM) for your FUT squad. With an Engine chemistry style his poor agility and balance get boosted, as well as his pace and  passing. One of the best aspects of his card is his shooting, with 96 long shots and 93 finishing you can bag some bangers from outside the box. 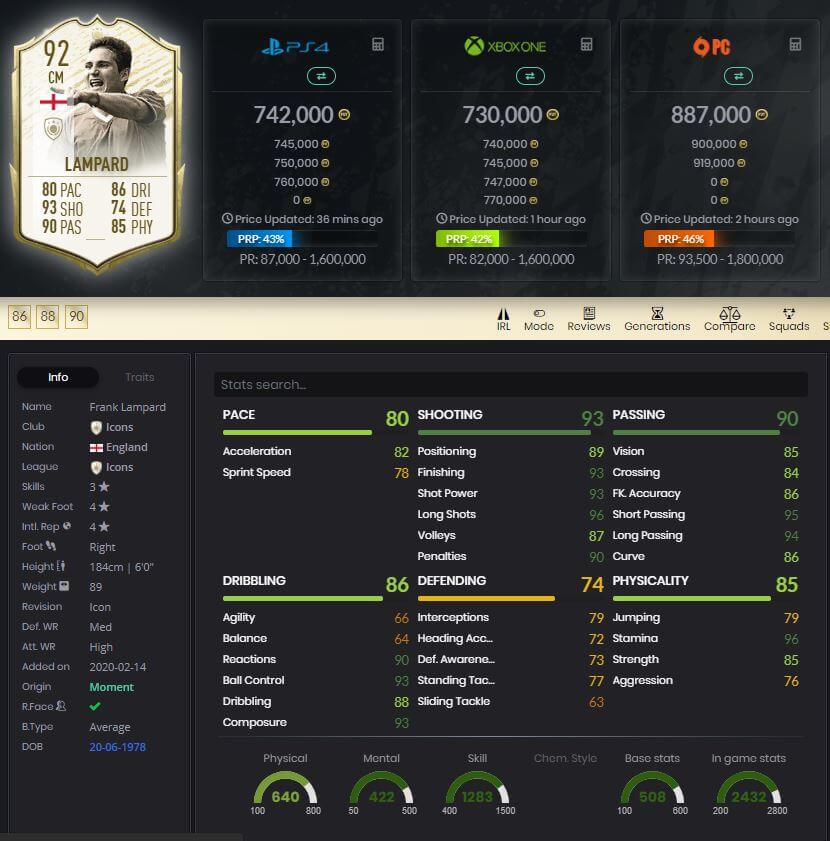 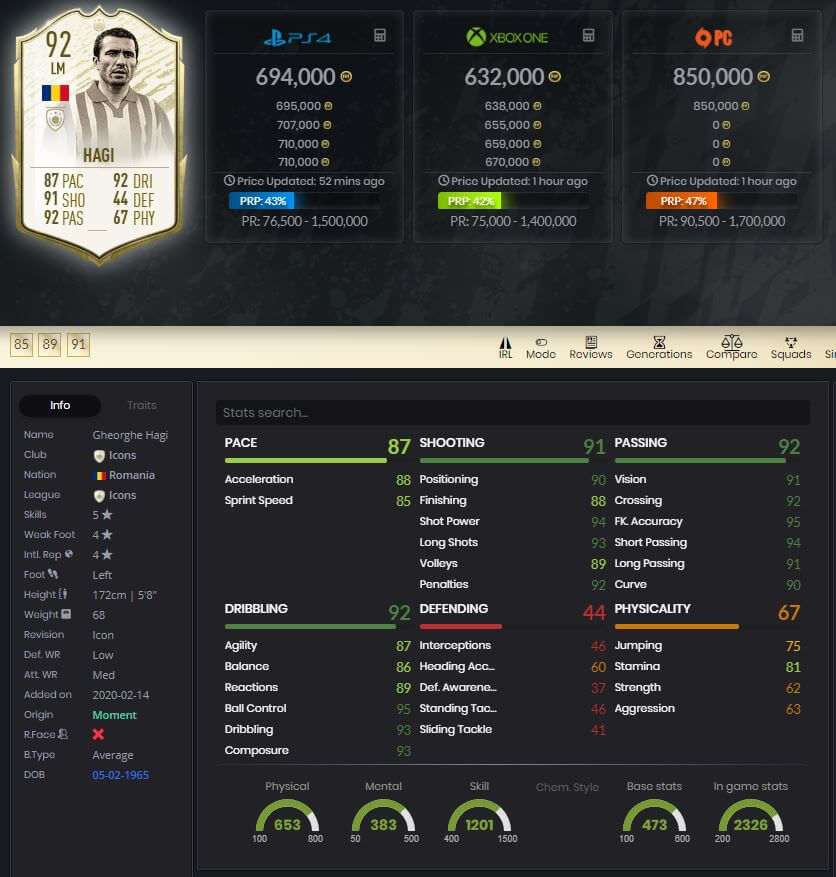 Baggio’s moments card gets a significant boost from his Prime card. +3 Pace, +6 Shooting, +2 Dribbling. With a Maestro chemestry style his shooting gets boosted to 94, passing to 96 and dribbling to 97!!! He makes a good CAM or Striker.

Blanc’s Prime card can be considered better than some of other defender Prime Icon Moments cards. With 92 defending, 79 pace and 78 dribbling he will make your defense an impenetrable wall.

For under one million coins, you can bolster your Ultimate Team with some elite icons, here’s a look at seven of them;

Roberto Baggio is one of the most iconic players to ever kick a ball and EA Sports did him justice by handing him an elite prime icon card, capable of competing at the highest level on Division Rivals and the weekend league. 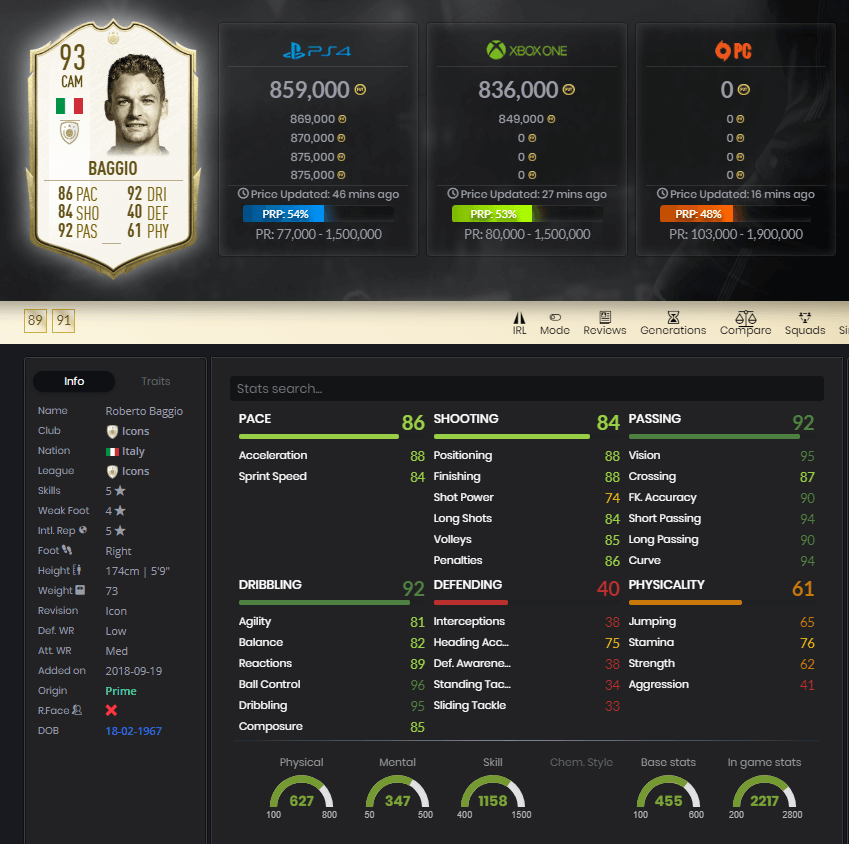 Prime Baggio boasts 92 dribbling and 92 passing, allowing him to consistently create goalscoring opportunities for your team.

Puyol enjoyed an illustrious career at Barcelona winning numerous accolades and proving to be one of the best defenders to have ever featured for the Blaugrana.

His world-class displays for Barcelona earned him a solid icon card, which is arguably one of the best centre-back FUT items on FIFA 20.

With a shadow chemistry style, Puyol’s pace will go up to 82, while his overall defensive stat will get maxed out at 99 making him an absolute unit in defence.

Prime Javier Zanetti is arguably amongst the top three right-backs on FIFA 20. For under one million coins, you’d be getting a defender capable of shrugging literally any player on the game off the ball. 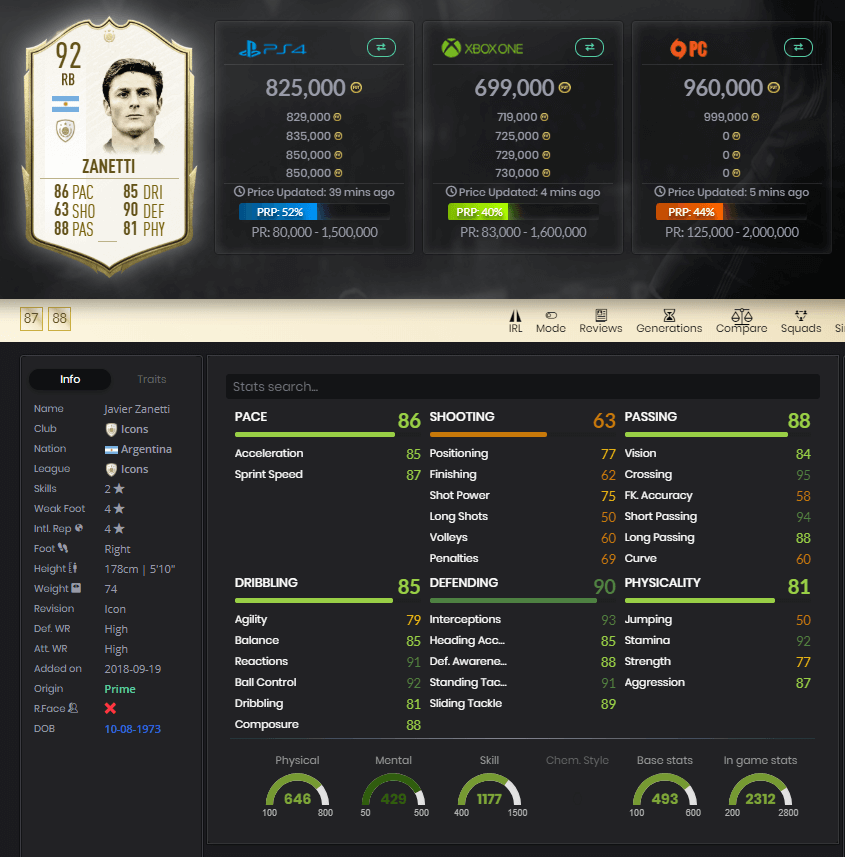 Dennis Bergkamp is one of the most technically gifted players to ever set foot on a football pitch. He garnered a reputation for himself as one of the best number 10s in the Premier League, earning himself an impressive icon card. 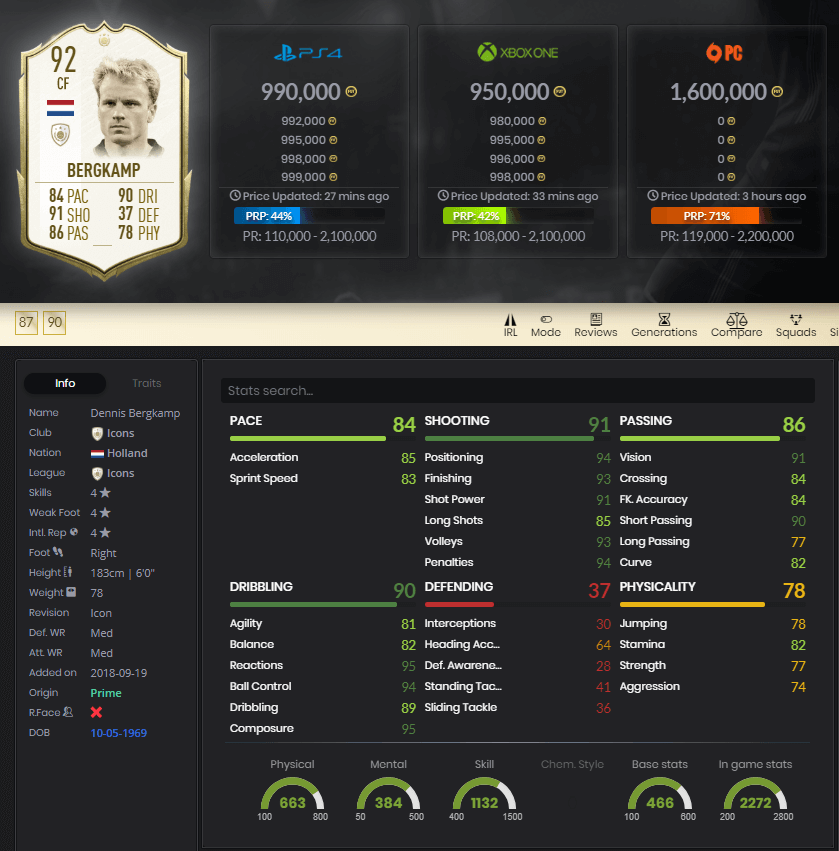 He boasts 94 pace and 98 finishing with a hunter chemistry style, allowing him to be lethal in front of goal.

Where Bergkamp really shines, though, is in his creative output – thanks to his dribbling and passing stats which are rated 90 and 86 respectively.

Pirlo, in his playing days was one of the best midfielders in the world. He reinvented the reigista role, becoming a key figure in Juventus’ midfield.

His prime icon card boasts a five-star skill rating allowing you to perform moves such as the elastico, sombero flick and the rabona fake. 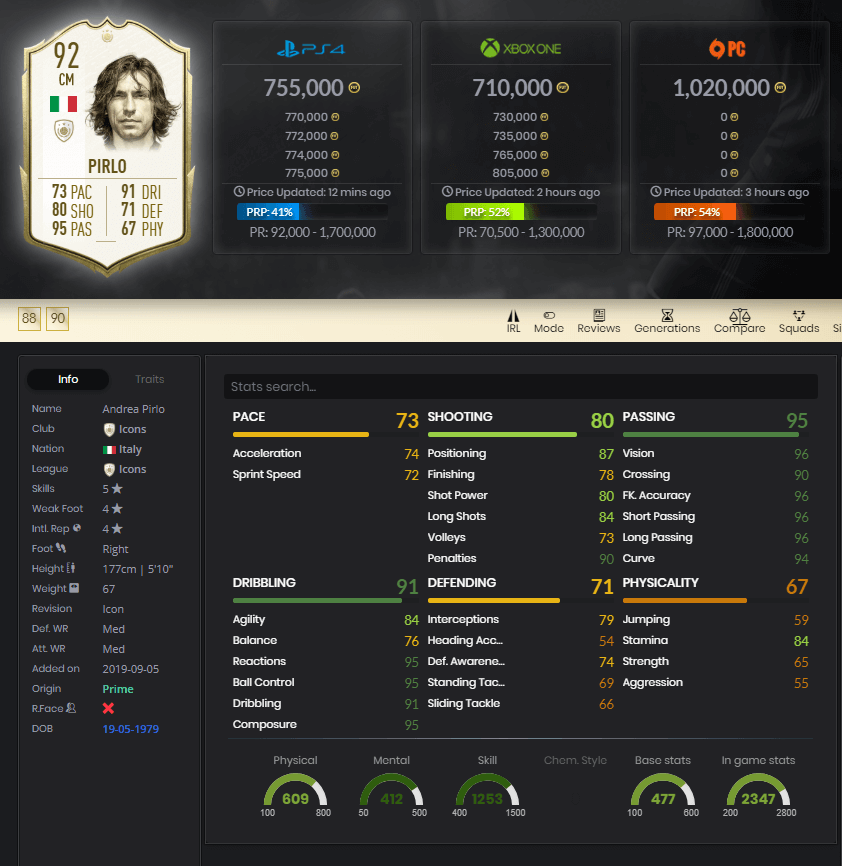 His ability to take free-kicks is rated 96, so you can count on him to find the back of the net from deadball situations.

Gheorghe Hagi belongs to an elite group of players who have played for both Real Madrid and Barcelona.

He attained legendary status after an illustrious career which spanned 19 years, hence earning himself an overpowered FUT item. 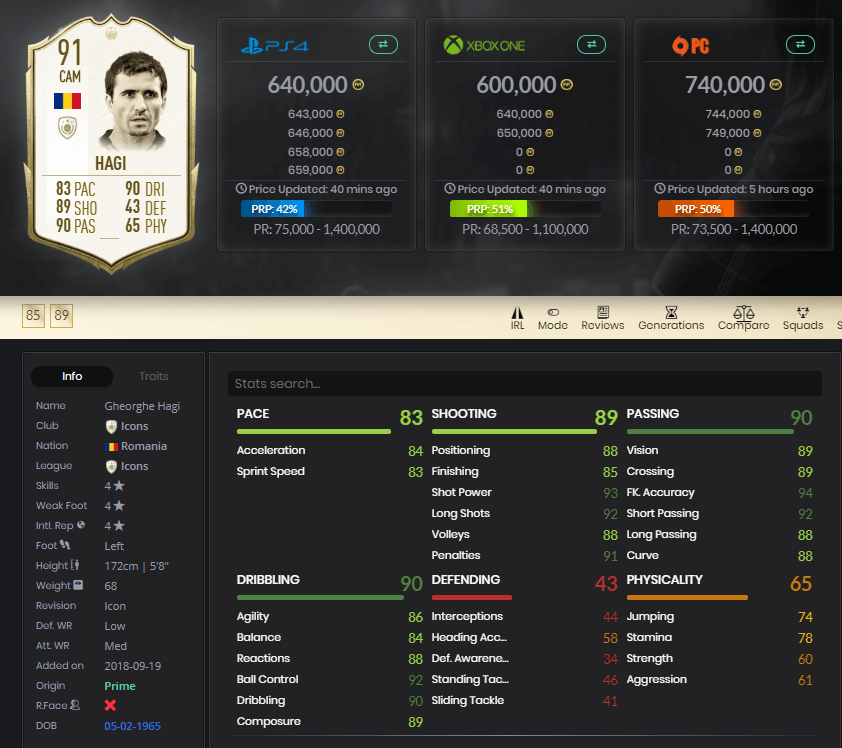 Hagi possesses 90 dribbling, 90 passing and 89 shooting, allowing him to be a real threat in the attacking third. Stick him in the number 10 role, and watch the magic unfold.

Standing at 6’0 and boasting 89 physicality with an anchor chemistry style, Steven Gerrard’s prime icon card is one of the best midfielders you can sign on Ultimate Team.

The Englishman will be able to contribute to your team’s attacking moves whilst also tracking back to help out in defence as he possesses 90 shooting and 86 defending.

If you’re looking for an elite midfielder who costs under 1 million coins, then Prime Icon Stevie G is your guy.