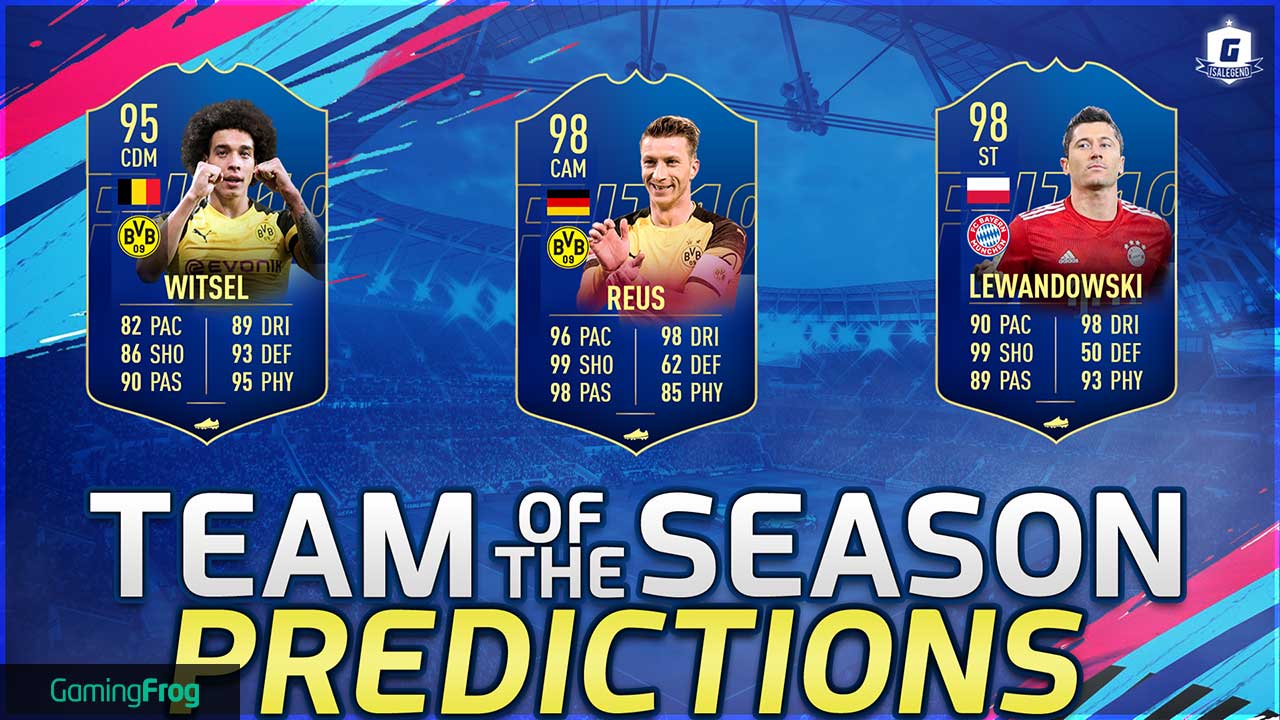 TOTS is inbound and with it some very nice cards to look forward to from the Bundesliga for those who put in their hard work this season, from a number of regular faces to some new faces and returning players too. With this squad of 23, there is potential for other TOTS cards through objectives and SBCs, but for the purpose of this we are focusing on the main 23.

Yann Sommer – GK – OVR 84 While defensively Monchengladbach have been suspect in this second half of the season they have been saved by Sommer, while they may not be challenge for the title anymore, a number of performances this season have stood out and looks set for a TOTS

Willi Orban – CB – OVR 79 Orban has been key at the back for Leipzig as like Werner and Poulsen up top, while he may have a nation change to Hungary which dents his usability into hybrids and his pace an issue too, this does not affect a well deserved TOTS Card.

Joshua Kimmich – RB – OVR 86 Kimmich has been consistent at the back all season with him being a key component for them, as a result of his performances in the league should merit a nice TOTS, the big question is the pace on him as needs to be useable too especially at RB.

Danny Da Costa – RB – OVR 78 Da Costa has been 1 of the bright spots of a full on season for Frankfurt which has faced heartbreak in Europe and run ragged in the Bundesliga, while other defenders may get the nod, Da Costa deserves a strong mention at least due to his consistency and could be a major improvement on his FUT Swap Card.

Thorgan Hazard – RW – OVR 83 Hazard has been 1 of the positives in this Monchengladbach side as highlighted by his upgrade and IF, while team have struggled since the winter break he deserves a TOTS though for his form all season.

Marco Reus- CAM – OVR 88 A TOTS Card for Reus could be very exciting but also at the same time drive a few people mad as in the 1st half of the season he was the POTM king for the Bundesliga with 3 POTMs while he’s not had any since and has multiple IFs & a Headliners card too. His TOTS at CAM will be an appealing card to own.

Julian Brandt – CM – OVR 82 Brandt has made the midfield his own at Leverkusen alongside Kai Havertz another who potentially could earn a TOTS Card too and with Brandt playing CM this year compared to LM, this TOTS card could be a neat addition alongside an already impressive POTM SBC Card.

Axel Witsel – CDM – OVR 85 Witsel has found himself a key cog in the Dortmund team, with him showing to be a smart piece of business last summer, with multiple special cards already his TOTS card could be an interesting card to own as a result.

Jadon Sancho – RW – OVR 79 Dortmund have ran the title race well and a big part down to players like Sancho who have stood out impressively, with multiple specials to note and could his TOTS card be the best yet.

Luka Jovic- ST – OVR 80 Jovic has been a key part of Frankfurt’s attack on all fronts and as a result led to the permanent transfer to them and while he has a FFS Card, this TOTS card should go above that and Jovic has deserved it.

Peter Gulacsi – GK- OVR 79 Leipzig have been impressive attacking wise in Poulsen & Werner but defensively sound too a key part of this is down to, he has a chance of being the sub GK.

Kai Havertz – CAM – OVR 81 Havertz has been another key piece of the midfield for Leverkusen, as noted by special cards rounded off with a recent POTM Card and throughout the season he’s stood out well and a TOTS looks set for him as a result with him having a FFS Card we would expect the TOTS to be just above to stand out even more.

Kerem Demirbay – CAM – OVR 82 Demirbay has been running the Hoffenheim midfield, challenging with a good balance of goals and assists to his name with a number of his performances have stood out with multiple IFs and a Headliners card as well, a TOTS Card looks set to be his highlight of the year.

Filip Kostic- LM – OVR 77 Kostic has been a key part of Frankfurt’s attack on all fronts and as a result led to the permanent transfer to them and while he has mostly played LM & has got a LWB card we suspect the TOTS card should be a LM card Kostic has deserved his spot.

Yussuf Poulsen – ST- OVR 79 Poulsen been a key part of the Leipzig attack alongside Werner, with multiple IFs too his TOTS card has the potential to be a neat addition.

Paco Alcacer – ST – OVR 79 His first half of the season form led to Dortmund making his transfer permanent, while he hasn’t scored as many since, he has still been a key part of Dortmund’s season and deserves a TOTS as shown by finishing 2nd in the goalscoring charts.

Andrej Kramaric – ST – OVR 83 Kramaric has made the Bundesliga his own in recent seasons and proved a shrewd striker for Hoffenheim, with another good season sorted a TOTS looks set for him.

Nico Elvedi – CB – OVR 77 Elvedi has been a key part of the Monchengladbach defence while others may get the nod over him such as a re-release of Roussillon, his efforts can’t be knocked at least, has a strong shout to be in though as a defensive option especially going on the 1st half of the season’s form and while the team drifted off in the end, he has been impressive as shown by an IF.

Maximilian Eggestein – CM- OVR 79 Bremen have been impressive in all areas of their team and deserve at least one TOTS Card the big question is who gets in the main team while who may feature in SBCs and Objectives Eggestein has potentially done enough ahead of Kruse to get in the TOTS, therefore the young German star could see a nice upgrade in due course.

Marcel Halstenberg – LB – OVR 78 Halstenberg has been defensively sound for Leipzig all season who could be one of the other main teams to bag ample TOTS, with Halstenberg bagging a recent IF to show how consistent and impressive he has been as a result, he has a strong shout of a reserve spot at least in the Bundesliga TOTS.

Ondrej Duda – CAM – OVR 73 One of Berlin’s key players who somehow has yet to bag an upgrade or special card at all this year, despite a number of impressive performances, looks set for a TOTS Card, while may not be the most appealing, he has definitely earned his spot, could potentially be the objective card for the Bundesliga or in most consistent so be aware of that too.

Wout Weghorst – ST – OVR 77 Weghorst has been a key part of the Wolfsburg attack, as highlighted by multiple IFs and with his goal tally finishing him 1 off being joint second with Alcacer he deserves a strong chance of featuring and if given the right stats boost especially in pace, could make for an imposing figure to deliver crosses as a result.

Andrej Kramaric – ST – OVR 83 Kramaric has made the Bundesliga his own in recent seasons and proved a shrewd striker for Hoffenheim, with another good season sorted a TOTS looks set for him.

(Video does not reflect article updates)