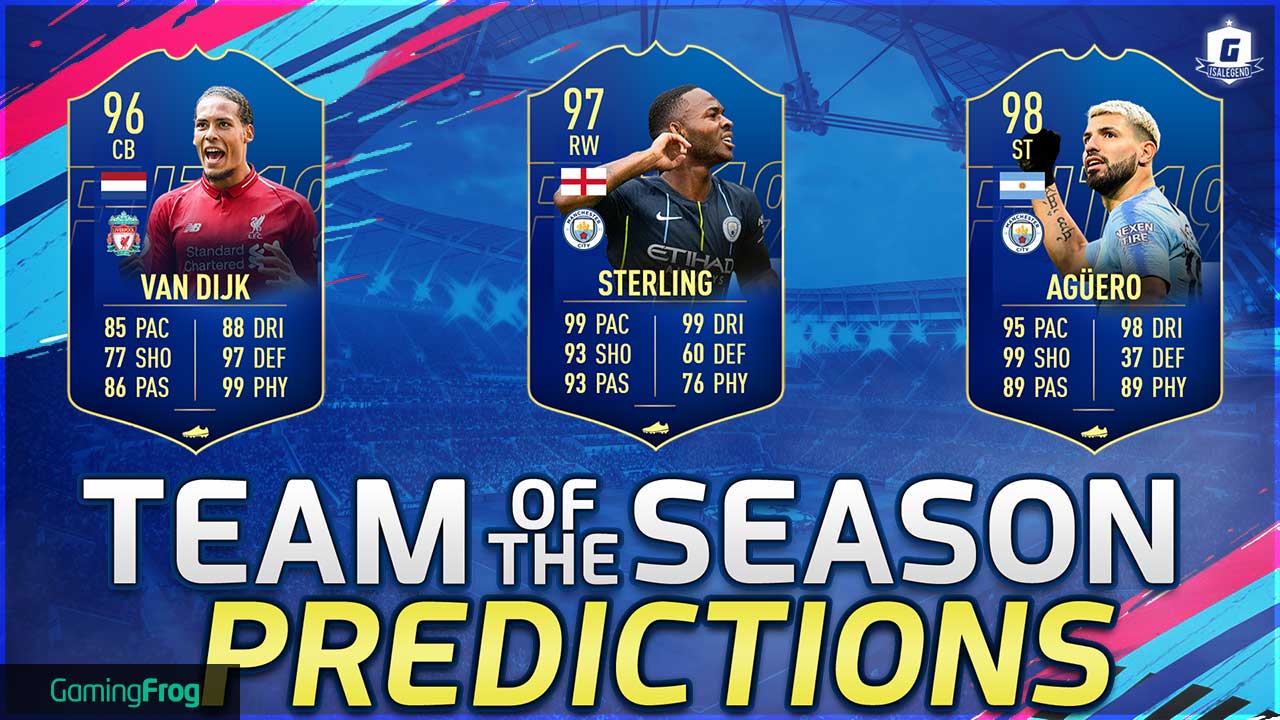 TOTS is inbound and with it some very nice cards to look forward to from the Premier League for those who put in their hard work this season, from a number of regular faces to some new faces and returning players too. With this squad of 23, there is potential for other TOTS cards through objectives and SBCs, but for the purpose of this we are focusing on the main 23.

Alisson  – GK – OVR 87 Alisson has been a difference maker as part of that defensive unit at Liverpool with considerable saves made and while had the odd moment to forget, he has been key all season as they challenge on 2 fronts and looks set for a TOTS Card as a result. Remember his OTW will not be affected by a TOTS Card.

Virgil Van Djik – CB – OVR 88 Van Djik has been the focal point of the Liverpool back 4, with a number of impressive displays, as shown by multiple special cards highlighted by a TOTY Card, the TOTS looks to round off his season.

Aymeric Laporte – CB – OVR 84 Manchester City have been consistent too at the back with Laporte a key component playing CB mostly and deputising in at LB too where needed, as a result of his performances in the league should merit a nice TOTS, the big question is the pace on him as needs to be useable too.

Andrew Robertson – LB – OVR 83 Robertson on assists alone should get him, with him and Alexander-Arnold having a friendly rivalry to get top assists, but defensively too Robertson has shown to be a key defender for Liverpool and has cemented himself as first choice left-back for club and country.

Eden Hazard – LM – OVR 91 Hazard has been 1 of the positives in this Chelsea side as highlighted by a POTM and multiple IFs, seems set to be leaving this summer and as a result could be 1 of his last special cards for Chelsea.

Paul Pogba- CM – OVR 88 A TOTS Card for Pogba could be controversial as in the 1st half of the season he was a shadow and while he had a good run of late under Solskjaer, appears to not be firing on all cylinders of late, however it’s this good form he showed which may swing him featuring in the TOTS.

David Silva – CM – OVR 89 David Silva has been a key piece of the midfield for Manchester City, in De Bruyne’s absence as noted by multiple IFs and even his own TOTY Card, throughout the season he’s stood out well and a TOTS looks set for him as a result.

Raheem Sterling – LW – OVR 87 Sterling has found himself a key cog in the Manchester City team, with him playing multiple positions where needed, his TOTS card could be an interesting position but we have opted for LW but don’t be surprised to see as a RW as shown by his mixed variety of cards.

Sadio Mane – LW – OVR 86 Liverpool have ran the title race well and a big part down to their front 3, with Mane showing his form with multiple specials to note and could be his TOTS card yet.

Sergio Aguero – ST – OVR 89 Aguero has led the line standing out for Manchester City for another season and as a result looks set for another TOTS card.

Mohamed Salah – ST – OVR 88 While not as prolific as last season, he has still been a key member of Liverpool’s front 3 as shown by still challenging for the golden boot, he is likely to have a neat ST TOTS Card to note too.

Ederson – GK – OVR 86 Ederson has been key throughout the season with a number of clean sheets which have helped in the title race for Manchester City, with also being very consistent throughout should earn himself a TOTS Card.

Lucas Digne – LB – OVR 81 Digne has been a key part of the Everton defence while others may get the nod over him, his efforts can’t be knocked at least, has a strong shout to be in though as a defensive option.

Abdoulaye Doucoure – CDM – OVR 81 Doucoure has made the midfield his own at Watford and looks set for another TOTS to go alongside an already impressive League SBC Card.

Ryan Fraser – LM – OVR 77 Like his Scottish counterpart Robertson, Fraser has made assists his own this season for Bournemouth, challenging for the top assists this season but in general his performances have stood out with a number of goals too and with multiple IFs as well, a TOTS Card looks set to be his highlight of the year.

Felipe Anderson – LM – OVR 84 West Ham’s record transfer has definitely shown to be a shrewd piece of business with him running riot in the 1st half of the season as shown by multiple IFs and a upgrade too, which as a result should help him towards a nice TOTS Card, remember his OTW will not be affected by a TOTS Card.

Harry Kane – ST- OVR 90 Kane been a key part of the Spurs attack helping them on all fronts, while despite a couple injuries have occurred he has stood out for another TOTS card.

Pierre-Emerick Aubameyang – ST – OVR 88 Aubameyang has been a key part of Arsenal’s attack alongside Lacazette, while we feel Aubameyang is more likely due to his 18 goals and 5 assists, Lacazette at least deserves a mention for an outside shout of a TOTS Card.

Ben Foster – GK- OVR 77 While Foster may not necessarily be the 1st shout for a TOTS GK choice from the EPL, while others may consider Fabianski, Dubravka or Etheridge for example. Foster has been a key part in helping Watford domestically achieve 1 of their best seasons in a long time and possibly on the cusp of finishing 7th, with a number of impressive performances this season and 2 IFs, he has a chance of being the reserve GK.

Trent Alexander-Arnold – RB – OVR 78 While injuries may have hampered Alexander-Arnold at times throughout the season, but despite that he’s put in a number of performances this season, most notable 3 assists in 1 game but even then he has a good shout to be in the TOTS squad with the alternative possibly Wan-Bissaka.

Bernardo Silva – RW – OVR 84 Bernardo Silva has found himself a key cog in the Manchester City team, with him playing multiple positions where needed, his TOTS card could be an interesting position but we have opted for RW but don’t be surprised to see as a CM as shown by his MOTM Cards.

Raul Jimenez- ST – OVR 78 Jimenez has been a key part of Wolves attack on all fronts and as a result led to the permanent transfer to them and while other forwards may be considered a shout over him for this reserve spot, Jimenez has deserved it.

Marcus Rashford – ST – OVR 82 Rashford 1st half of the season was not firing on all cylinders but since Solskjaer came in he’s been a different player with a POTM & other special cards to note, been a key part of the United attack with him as a result on his 2nd half of the season form doing enough to merit a TOTS spot, in regards to his Headliners that will not be affected by his TOTS card.