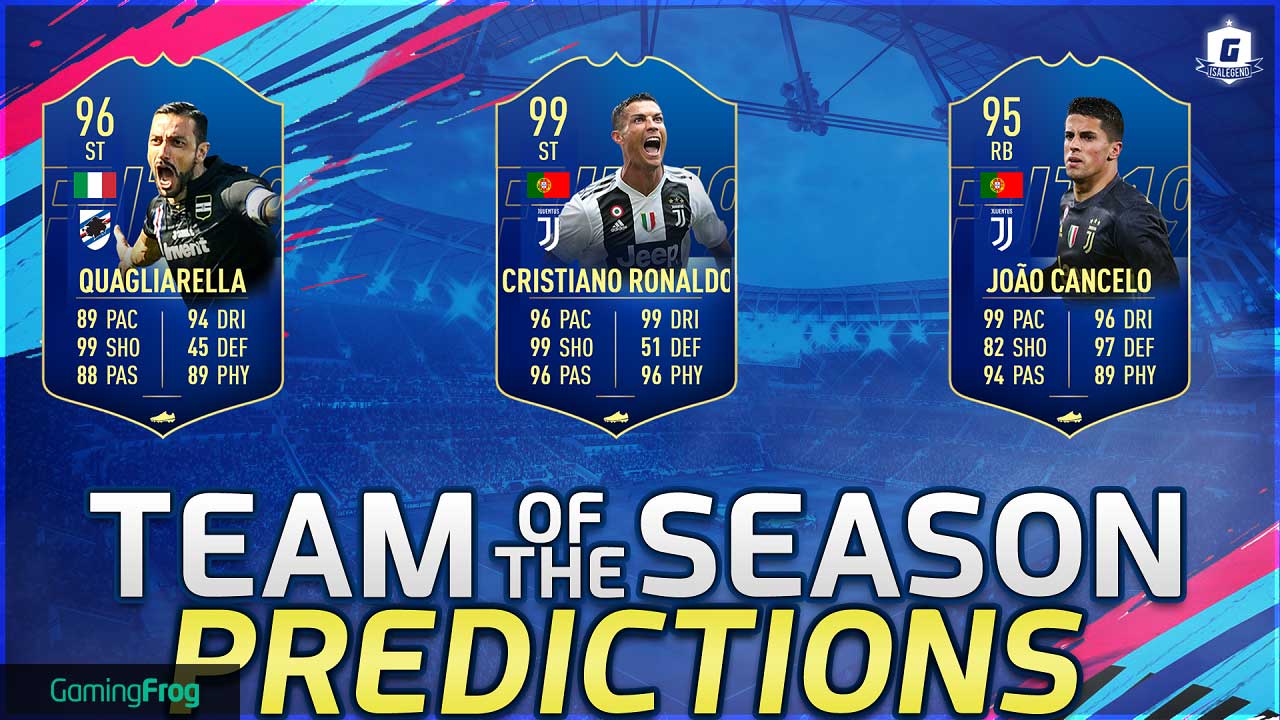 TOTS is inbound anFIFA 19 Eredivise TOTS Predicitond with it some very nice cards to look forward to from Serie A for those who put in their hard work this season, from a number of regular faces to some new faces and returning players too. With this squad of 23, there is potential for other TOTS cards through objectives and SBCs, but for the purpose of this we are focusing on the main 23.

Wojciech Szczesny – GK – OVR 86 While defensively Juventus have been suspect in recent weeks Szczesny has made the number 1 his own despite the challenge of Perin, a number of performances this season have stood out as shown by an upgrade & multiple IFs and looks set for a TOTS.

Alex Sandro- LB – OVR 86 Sandro has been key at the back for Juventus as like Ronaldo, PjanIc and Kean, seems set for his regular TOTS card.

Kalidou Koulibaly- CB – OVR 88 Koulibaly has been consistent at the back with him being a key component for them, as a result of his performances in the league should merit a TOTS.

Joao Cancelo- RB – OVR 83 As with Sandro, Cancelo been consistent at the back and deserves a spot in at RB, as shown by his multiple IFs and upgrade, been a shrewd signing for Juventus and looks to be given a nice TOTS card, big question is will he be in the 80+ club.

Lorenzo Insigne – LW – OVR 88 Insigne has been 1 of the consistent cogs in this Napoli side as highlighted by his other special cards, while others within the team or league may feature he deserves a TOTS though for his form all season.

Miralem Pjanic- CM – OVR 86 A regular TOTS Card for Pjanic appears the case, the big question is though others in the team or league may feature, but time will tell of course, should be a generally useful SBC Card to keep in mind if happens.

Alejandro Gomez – CAM – OVR 84 Gomez has been a key piece of the attack for Atalanta, as noted by multiple special cards and throughout the season he’s stood out well and a TOTS looks set for him as a result but others may get the nod ahead of him especially in the team with how impressive they have been.

Allan – CM – OVR 84 Allan has found himself a key cog in the Napoli team, and as he was in the Most Consistent we assume that he has been good enough to merit a Serie A TOTS space and would be a re-release of his Most Consistent card.

Fabio Quagliarella – ST – OVR 82 The veteran forward has been key for Sampdoria this season, as shown by his impressive goal tally as current top goalscorer in the league, his TOTS will be very appealing to those a fan of him and potential to be his best card ever on FIFA.

Cristiano Ronaldo- ST – OVR 94 Ronaldo has led the line standing out for Juventus despite players like Kean, Manduzkic challenge this and as a result looks set for another TOTS card this being his 1st in Serie A.

Duvan Zapata – ST – OVR 79 Zapata has been part of the impressive front line for Atalanta and shown by his multiple special cards and the TOTS will be the best card for him to enjoy this FIFA and the big question is what his stats will look like.

Gianlugi Donnarumma- GK – OVR 83 Donnarumma has been a difference maker as part of that defensive unit at Milan with considerable saves made and while had the odd moment to forget, he has been key all season as they challenge for a Champions League place.

Milan Skrinar- CB – OVR 86 Skrinar has been consistent at the back all season with him being a key component for them, as a result of his performances in the league should merit a nice TOTS, with him having multiple special cards too this should be his best card this year.

Aleksandar Kolarov – LB – OVR 83 Kolarov has been defensively sound for Roma all season who could be one of the other teams to bag a few TOTS, with Kolarov hopefully given a good boost on his IF.

Rodrigo De Paul – LM – OVR 77 De Paul has been running the Udinese attack, challenging with a good balance of goals and assists to his name with a number of his performances have stood out with a couple IF Cards due to his performances & upgrade too only question is what position he gets as played LM/CAM/CF/ST but with Udinese fighting to stay up could go against but a TOTS Card looks set to be his highlight of the year.

Federico Chiesa – RW – OVR 79 Chiesa has been a key part of the Fiorentina attack while others may get the nod over him, his efforts can’t be knocked at least, has a strong shout to be in though as a attacking option as shown by his special cards obtained this year.

Josip Ilicic – CF- OVR 81 Ilicic been a key part of the Atalanta attack as they fight to challenge for Champions League, with multiple IFs & MOTM his TOTS card has the potential to be a neat addition.

Ciro Immobile – ST – OVR 87 Immobile may have struggled at times not scoring as many as usual but feel he has done just enough to merit a TOTS Card, he potentially may end up as an objective or SBC Card though if does not get in the main team.

Samir Handanovic – GK- OVR 88 Handanovic has been impressive in net for Inter as a result of their defensive displays, he has a chance of being the reserve GK.

Alessio Romangoli – CB – OVR 82 Romagnoli has been defensively sound for Milan all season who could be one of the other teams to bag a few TOTS, with Romagnoli the big question is though could he be passed on for other defenders like Acerbi for example but see what happens.

Armando Izzo – CB – OVR 77 Izzo has been a key part of the Torino team who have been in the top half of the league all season challenging for a European place, his performances merit a TOTS and be a healthy boost on his IFs.

Arkadiusz Milik – ST – OVR 82 Milik has been a key part of Napoli’s attack on all fronts and as a result led to an IF and upgrade for him, his TOTS hopefully can be very appealing in terms of stats.

Krzysztof Piatek- ST – OVR 75 Piatek has taken to the Serie A so well he ran riot in the 1st half of the season for Genoa that it led to Milan buying him in January, he continued that form in the 2nd half of the season and looks set for a TOTS as a result.