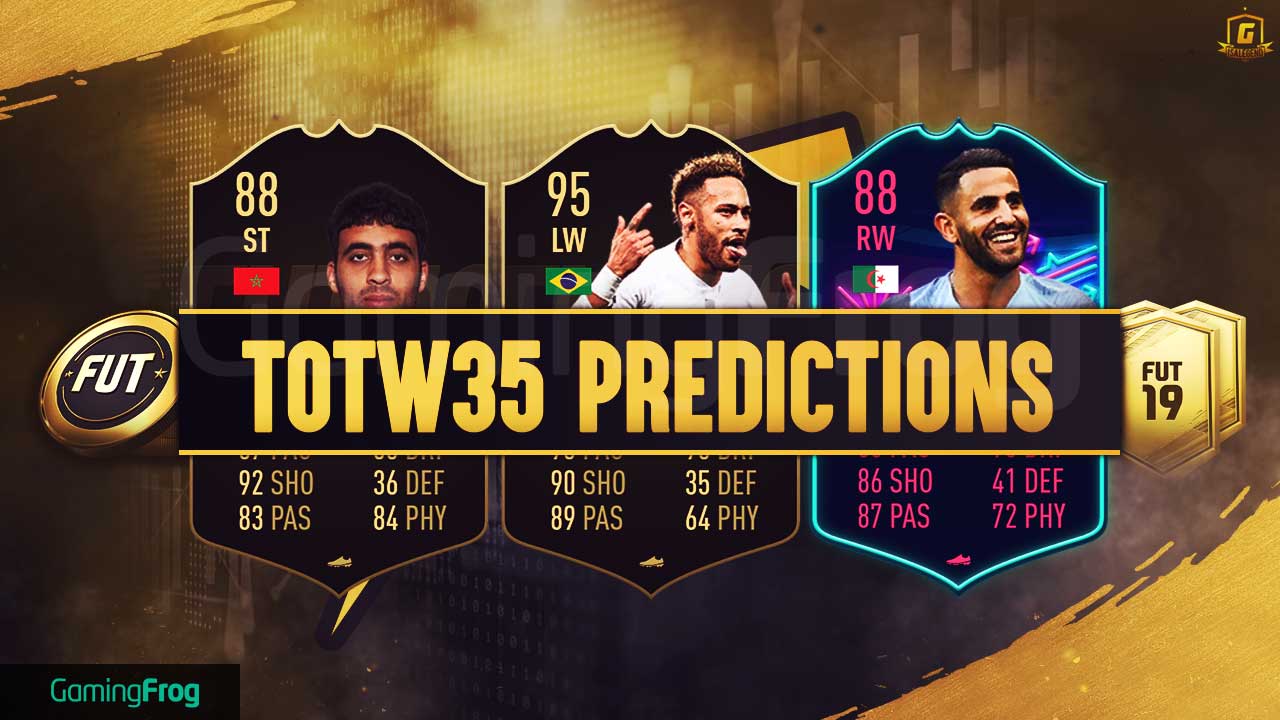 TOTW35 looks set to be mostly SBC Fodder with a few individual cards to get excited about plus with TOTS running too some cards may miss out depending on TOTS too.

With the Premier League finished this will be the last TOTW to expect any players from it till International Break, but other European Leagues will still run for a bit longer.

Benjamin Lecomte – GK – OVR 82 Lecomte looking set for a IF after an impressive shift in, earning a 7 from Gazzetta and 5 saves plus a clean sheet into the bargain, as a result done enough surely to get in.

Alessandro Florenzi – RB – OVR 82 Roma have to dig deep to get into European places and they did just that with a vital win against Juventus, Florenzi scored and kept a clean sheet, due to this deserves his first IF.

Matt Ritchie – LWB – OVR 77 Newcastle ended the season with a crushing victory over Fulham with multiple players standing out such as Schar and Ritchie, who instead of his usual RM was playing LWB, he bagged 2 assists in the game and kept a clean sheet, as a result he gets the nod but don’t be surprised if Schar gets another IF though.

Waldemar Anton – CB – OVR 77 Anton got himself a goal and a clean sheet in Hannover’s victory as a result sealing himself possibly an IF.

Joaquin – RM – OVR 82 Joaquin producing the goods with 2 goals for Betis and a 3 from Marca too as a result doing enough surely to bag an IF.

Thomas Delaney – CDM – OVR 79 Delaney was impressive in Dortmund’s victory over Dusseldorf, with 1 goal and 1 assist due to this a TIF looks set and with his League SBC Card currently an 86, this IF could be around the same stats for a much reduced price.

Nico Gaitan  – CAM – OVR 82 The Argentine attacker has been in impressive form since joining the MLS and shown again with 1 goal and 2 assists, he nearly had a 3rd which would have guaranteed him but the performance though should do enough to bag a 1st IF.

Riyad Mahrez – RM – OVR 85 Mahrez played a key role in Manchester City’s victory over Brighton with 1 goal and 1 assist, due to that performance and with him having a OTW card too, may go his way to another special card.

Neymar – LW – OVR 92 Another special card looks set for Neymar after 1 goal, 1 assist and a 7 from L’Equipe, while Buffon & Verratti also got 7s in the game, we have opted for Neymar as the marquee player in this TOTW due to his performance.

Dusan Tadic – LW – OVR 80 Tadic just continues to have an impressive season, making the inevitable TOTS card even more appealing we hope, he got himself 2 goals and 1 assist in their 4-1 victory earning an 8 into the bargain, while Ziyech earned a 9, we feel Tadic’s performance is tough to pass on but be wary of Van De Beek too for his showing, but expect someone from Ajax to get in.

Abderrazak Hamdallah  – ST – OVR 74 Another IF looks set for the Al-Nassr striker so soon after his Record Breaker, he got another hat-trick and making the Record Breaker obsolete pretty quickly, but be wary though due to how quick he had it, they may pass on him.

Michy Batshuayi  – ST – OVR 81 The Crystal Palace forward looks set for a SIF after an impressive performance in Palace’s 5-3 win over Bournemouth, while Zaha was equally impressive in the game, we have opted for Michy, due to that OTW card, which makes him a little more appealing as a result.

Daniel Didavi  – CAM – OVR 80 Didavi made an impressive performance for Stuttgart with 1 goal and 1 assist and bagging a spot in the Kicker TOTW, as a result, looks set for an IF.

Teji Savanier – CM – OVR 72 Savanier may seem an odd shout as he did not score or assist, but did hit the woodwork in the game, it’s for the 8 he got on L’Equipe which is what has earned him a spot in the TOTW & seems set for a SIF too, he has been consistent all season and this would be well deserved.

Salomon Kalou  – LM – OVR 79 The Hertha Berlin winger put in an impressive performance bagging 2 goals and a Kicker TOTW spot, as a result looks set for an IF which will go above his Scream card, but potentially not as appealing.

Aleksandar Prijovic – ST – OVR 75 Prijovic scored a hat-trick in the Saudi League, as a result bagging himself an IF in the discard IF club.

Maxwel Cornet – RW- OVR 75 Cornet stood out for Lyon bagging 2 goals and an 8 from L’Equipe doing enough to bag himself a 1st IF which goes just under his FUT Swap Card.

James Tavernier – RB – OVR 74 The Rangers RB scored a vital goal against Celtic in the Old Firm Derby, while Arfield stood out too in this game, we feel Tavernier cannot be missed out again and as a result he is getting an IF for a goal and clean sheet.

Neil Etheridge – GK- OVR 72 Etheridge made 10 saves and kept a clean sheet in Cardiff’s 2-0 win over Manchester United as a result of this gets an IF but don’t be surprised if Mendez-Laing sneaked in with his 2 goals.

Gianmarco Zigoni – ST – OVR 69 Zigoni joins the hat-trick club with his performance for his team, which should do enough to be part of the upcoming TOTW.

Peniel Mlapa – ST- OVR 68 A fan favourite of old looks set for an IF in Mlapa as he joined the hat-trick club with his performance for his team, which should do enough to be part of the upcoming TOTW. Dalmau would have taken this spot for 3 goals and 1 assist but his team lost in the last few minutes 5-4 but be wary of that just in-case as would be a SIF for Dalmau.

Alvaro Gimenez- ST – OVR 68 Another member of thehat-trick club in Alvaro who was impressive in Almeria’s 5-3 with his performance for his team, which should do enough to be part of the upcoming TOTW.