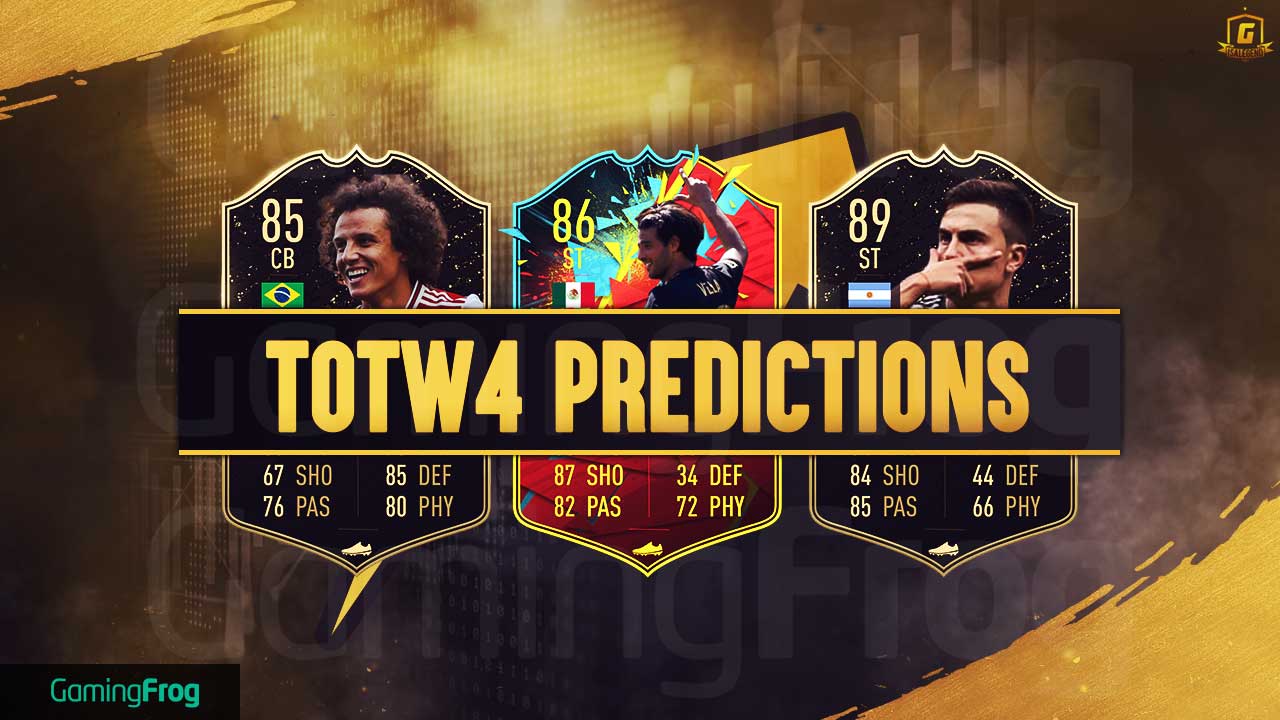 A curveball week thrown in with only scoring 13 when looked set for a good scoring week.

The big question for this TOTW, will players like Hazard, Gomez and Sarabia make the cut or will it be headlined by Dybala, David Luiz and Verratti? Will be interesting to see and hopefully these predictions give you a better idea.

Lukas Hradecky – GK – OVR 83 Hradecky looking set for an IF after an impressive shift in, earning a 1.5 from Kicker and 4 saves plus best Goalkeeper of the week into the bargain, as a result done enough surely to get in only negative is did not keep a clean sheet.

David Luiz – CB – OVR 83 Arsenal grinded out an important win against Bournemouth with Luiz in particular standing out with a goal and the clean sheet on top should help him get in.

Lewis Dunk  – CB – OVR 78 Dunk played an impressive part in Brighton’s 3-0 win, bagging an assist and a clean sheet, while Ryan and Connolly were equally impressive it’s the 10 clearances and no nonsense approach from Dunk which may do enough to see him in.

Nikola Milenkovic – CB – OVR 76 Milenkovic got himself a goal, 7 on Gazzetta, and a clean sheet in Fiorentina’s as a result sealing himself possibly an IF.

Steven Bergwijn – CM – OVR 82 Bergwijn was impressive in PSV’s victory, with 1 goal, 2 assists and a 8 from VI due to this an IF looks set with a position change too.

Marco Verratti – CM – OVR 86 Verratti was impressive in PSG’s 4-0 win with him bagging MOTM and 8 on L’Equipe, while Sarabia got 1 goal and 2 assists and has a OTW item, Verratti got the better match rating so has a strong shout for an IF.

Arturo Vidal  – CM – OVR 84 Barcelona ran riot against Sevilla with multiple players standing out including Semedo and Arthur, but we have opted for Vidal, due to his goal and 3 from Marca.

Florent Mollet – CAM – OVR 78 Mollet was impressive for Montpellier with 1 goal and 1 assist in win plus a 8 from L’Equipe, as a result looking set for an IF.

Carlos Vela – ST – OVR 83 Vela ran the show for LAFC with a hat-trick and as a result managed to break the MLS Record for goals in a season and looks set for a Record Breaker which would make a significant boost and position change too.

Paulo Dybala – ST – OVR 88 Dybala ran the show for Juventus as they dug deep against Inter, he got 1 goal and a 7.5 from Gazzetta which should do enough to see him get in due to nature of the game.

Wesley  -ST – OVR 79 Wesley put an impressive display for Aston Villa with 2 goals and 1 Assist, while he missed a penalty which would cement his spot we feel he’s done enough to get in the TOTW.

Aitor  – GK – OVR 76 Aitor looking set for an IF after an impressive shift in, earning a 3 from Marca and 9 saves plus a penalty save into the bargain only negative is no clean sheet, as a result done enough surely to get in.

Federico Valverde -CM – OVR 76 The Real Madrid midfielder bagged 1 assist and a 3 from Marca in a 4-2 win over Granada as a result deserves his spot in the TOTW, Hazard may sneak in too due to his performance but we feel Valverde deserved more.

Matheus Pereira – CAM – OVR 76 Pereira played a key part in the 4-2 win for West Brom, with 1 goal and 2 assists, as a result done enough we hope to get in.

Patrick Herrmann – RM – OVR 77 The Monchengladbach midfielder scored twice and 1 assist in his team’s 5-1 win plus a 1 on Kicker earning the POTW, as a result doing enough for a spot in the TOTW.

Jermain Defoe  – ST – OVR 76 Defoe scored a hat-trick for Rangers in their 5-0 win over Hamilton, as a result bags his 1st IF this FIFA.

Robin Gosens – LWB- OVR 76 Gosens got himself a goal and assist from LWB plus a 7.5 from Gazzetta while Gomez has been a form player in the side and missed out already, feel he’s missing out again this week for Gosens.

Sergis Adamyan – CAM – OVR 74 The Hoffenheim forward scored twice  in his team’s win over Bayern earning a 1.5 from Kicker as a result doing enough for a spot in the TOTW.

Adama Traore – RW – OVR 74 Adama scored twice for Wolves as they beat Manchester City 2-0, the big question is will he be RWB/RM/RW either way the 2 goals should see him get in the TOTW.

Adis Jahovic – ST- OVR 73 Jahovic joins the hat-trick club with his performance but in his case he got 4 goals which should seeing him join the TOTW.

Libor Kozak – ST – OVR 72 Kozak joins the hat-trick club, which should do enough to be part of the upcoming TOTW

Patson Daka – ST- OVR 71 The Salzburg forward scored a hat-trick in a 6-0 win, hopefully earning a spot in the TOTW.

Abdoulaye Sane- ST – OVR 66 Rounding off the TOTW Sane got a hat-trick and an assist too to help his cause earn a spot in the TOTW.