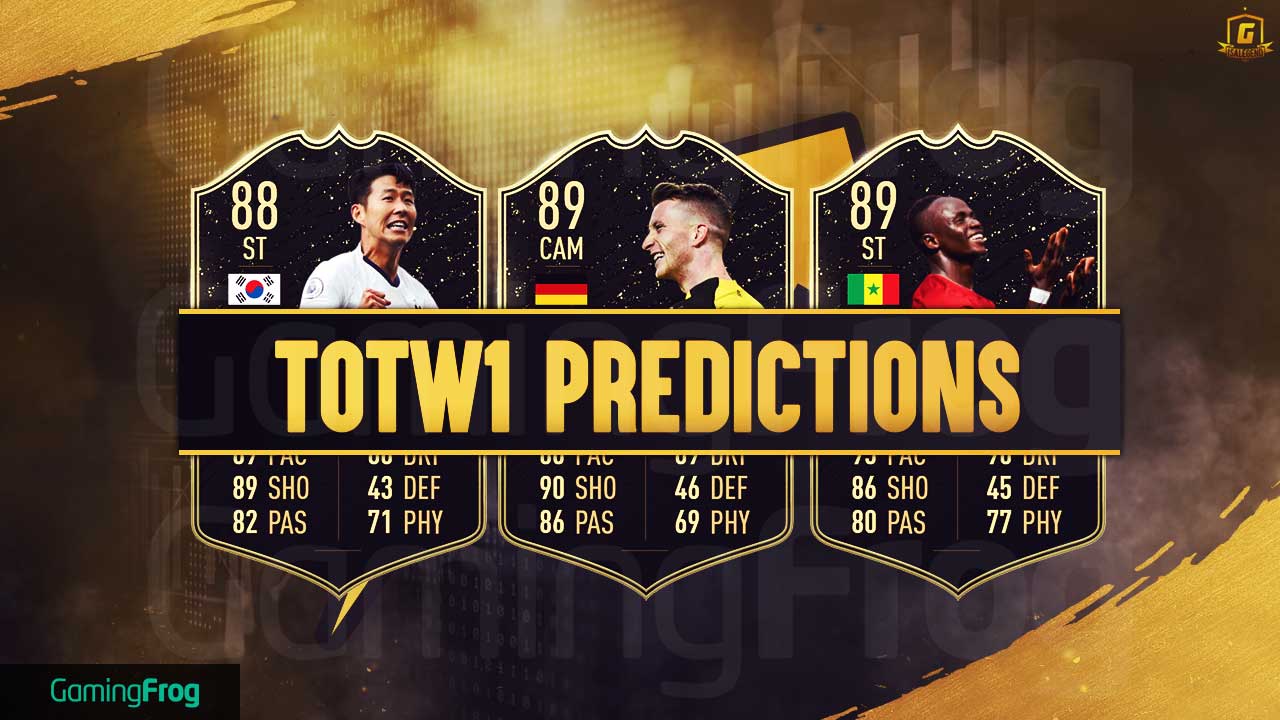 A new FIFA is upon us and with that TOTW1 is here looks set to be a good TOTW in terms of initial IFs to try and possibly 1st of many for others.

The big question for this TOTW with it being the 1st, will players like Suarez, Neymar make the cut or will it be headlined by Reus, Mane & Son? Will be interesting to see and hopefully these predictions give you a better idea.

Yann Sommer – GK – OVR 84 Sommer looking set for an IF after an impressive shift in, earning a 2 from Kicker and 7 saves plus a clean sheet into the bargain, as a result done enough surely to get in.

Nicolas Tagliafico – LB – OVR 82 Ajax were impressive in their performance over Heereenveen with Tagliafico scoring twice and receiving an 8.5 on Vi for his performance, only downside is he did not keep a clean sheet but should still have a strong chance of featuring.

Christian Gunter – LWB – OVR 75 Gunter got himself a goal, an assist and a 1.5 on Kicker and a clean sheet in Freiburg’s victory over Hoffenheim as a result sealing himself possibly an IF.

Frenkie De Jong – CM – OVR 85 De Jong was a key part in the 5-2 victory over Valencia with a goal and an assist but he only got a 2 on Marca, while Fati got the same, he is not in the database for what we understand, Arthur for an assist and Suarez coming off the bench with 2 goals all got 3 from Marca. Someone from Barcelona should get an IF, feel De Jong will get the nod.

Marco Reus – CAM – OVR 88 Reus was impressive in Dortmund’s victory over Leverkusen, with 2 goals and a 2 from Kicker due to this an IF looks set but the only problem is a plethora of Dortmund players stood out this is where his spot is at risk, Guerreiro, Hakimi, Delaney, Sancho and Paco Alcacer all stood too so when you have 6 players all worthy of a mention it is a little harder to determine who gets the nod.

Lorenzo Pellegrini  – CM – OVR 79 The Roma midfielder ran the show as they won 4-2 over Sassuolo with him bagging 3 assists and an impressive rating from Gazzetta too.

Martin Odegaard – CAM – OVR 78 Odegaard ran the show for Soceidad over Atletico Madrid and while Monreal, Moya and Oyazarbal all stood out too with 3s from Marca and Monreal scoring a goal and a clean sheet, we have opted for Odegaard for his goal and 3 from Marca too doing enough to bag the IF.

Sadio Mane – ST – OVR 88 Sadio Mane started at ST but once Firmino was brought on was moved to LW, but despite this he bagged 2 goals in Liverpool’s 3-1 win, Liverpool are one of the form teams in the world just now and with how they played against Newcastle we’d imagine someone will get in with Mane the likely shout only question is what position would his card be.

Heung Min Son – CF – OVR 87 Son was a key part of the Spurs attack bagging 2 goals in their 4-0 win while other EPL forwards also stood out including Wilson, Abraham and Mane, possibly 1 may miss out but feel Son stood out to deserve his place.

Karim Benzema  – ST – OVR 87 Benzema put an impressive display for Real Madrid with 2 goals and 3 from Marca, while a number of players stood out this week with 2 goals, feel he deserves the nod over others, but he could get the nod ahead.

Zlatan Ibrahimovic  – ST – OVR 85 The LA Galaxy forward ran riot in the 7-2 win with a hat-trick while he missed his initial penalty but scored straight after, with the lack of hat-tricks from gold players he gets the nod.

Tammy Abraham – ST – OVR 76 Abraham played a key part in the 5-2 win for Chelsea, while he may have got an OG too on top of his hat-trick he should get into the TOTW.

Luiz Araujo  – RM – OVR 75 The Lille Winger will be tasked to play a part in ensuring the form shown last season with Pepe continues and with a vital goal plus an 8 from L’Equipe in their win should stand in good stead towards receiving an IF.

Guilherme -CAM – OVR 75 Guilherme bagged 1 goal and 2 assists in his team’s 4-0 win plus looking at the team sheet he played CAM so a position change from RM could be appealing for those looking for a cheap CAM with pace and deserves his spot in the TOTW.

Darren Randolph – GK- OVR 75 Randolph made 7 saves and kept a clean sheet in their win, while Casilla was also impressive for Leeds too, we’ve opted for Randolph from the division to get in.

Emiliano Buendía – RM – OVR 74 The Norwich winger played a key part in his side’s win over Manchester City with 2 assists, while Pukki was impressive too with 1 goal and 1 assist we’ve opted for Buendia to get the nod.

Erling Haland – ST- OVR 69 This could be the 1st of many IFs this season going on the form shown by Haland as he scored 3 goals and 2 assists in Salzburg’s 7-2 win, he walks into the TOTW with an dominant performance.

Ivan Toney – ST – OVR 68 Toney joins the hat-trick club with his performance for his team, which should do enough to be part of the upcoming TOTW but be wary of Maddison too who was equally impressive.

Robert Mazan – LB- OVR 67 The Tenerife LB scored a wonderful volley from a corner and created another while keeping a clean sheet in their 4-0 win. With Silver defenders especially standing out, this could be 1 card that is hard to not merit a spot.

Alan Czerwinski- RB – OVR 66 Czerwinski did 1 better than Mazan which is 1 Goal and 2 assists from RB while keeping a clean sheet too, when a defender makes 3 contributions in a game it is hard to not include.

Mustapha Bundu – RW – OVR 65 Rounding off the TOTW Bundu scored a hat-trick in his side’s 3-0 win as a result a spot in the TOTW looks likely especially with the lack of Hat-tricks in general.