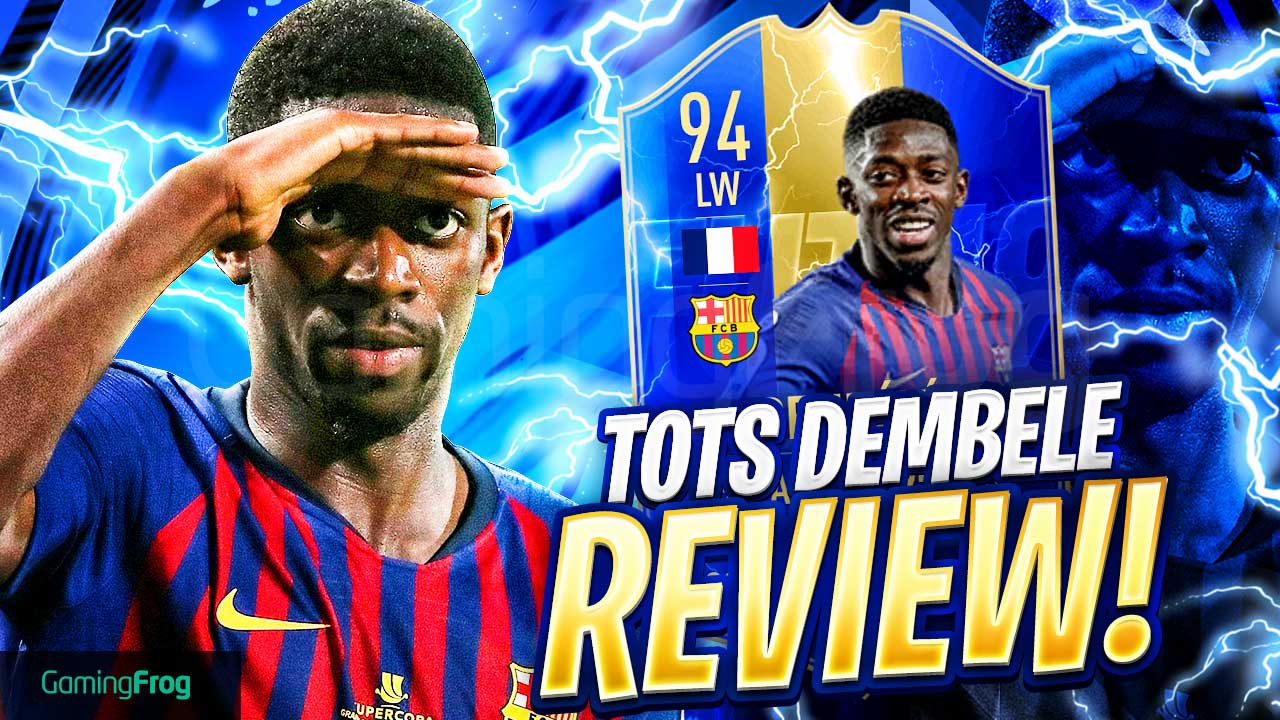 After obtaining 13 goal contributions (8 goals and 5 assists) in 29 appearances (20 starts) at the age of 22 in LaLiga, I was quite surprised when Dembele was given this Team Of The Season card, however he did help his team Barcelona, to finishing 1st in the league and 11 points clear of second place.

I wasn’t too keen on Dembele’s headliner card which I had recently used, however looking at the face stats on the Dembele card, which looked amazing, interested me a lot into trying out this card in FUT.

Links 10/10 – This card is French and from LaLiga which is perfect as it allows multiple squad possibilities to fit his card into your squad!

Height 8/10 – Because of him being fairly tall in game it means Dembele is a little bit clunky however if you love crossing this card seems taller than 5 foot 10 in game and he is very good and effective at headers!

Work rates 10/10 –  Dembele has the perfect work rates for a wide attacking midfielder or a left/right forward. The High/low work rates mean that Dembele is always working hard to get in good positions and make good runs in behind the defensive lines.

Preferred foot 10/10 –  Dembele’s left foot is very powerful and effective in game however with his 5 star weak foot it means that both feet are strong and effective allowing you to play him on either side of the pitch as he can shoot very well with both feet.

Weak foot 10/10 – Dembele has a 5 star weak foot and you can really see this as there is no deficiency with shooting with his right foot nor his left foot, they feel exactly the same! This means it is perfect.

Skill moves 7/10 – Dembele although having 4 star skill moves which is great for a winger is sometimes let down by his 91 ball control, where the ball when skilling left his foot to far leading to defenders being able to tackle him easily, however his skill moves were quite receptive!

Pace 10/10 – Werner has a face card stat of 99 pace this feels exactly right, he is one of the quickest players I have used in this game! His 99 acceleration and 97 sprint speed really reflect this…however his clunky in game look makes him feel a bit slower however he is still very quick!

Shooting 10/10 – Dembele has a face stat of 93, however in game this feels 97+! His 99 shot power is very useful when trying to score which is supported well by his 94 finishing. His 96 attacking position was amazing as Dembele was always an option on the pitch n the attack which was very useful! His 81 long shots were decent but could be better, but his other shooting stats compensated well for this! The 1 penalty that I took with Dembele was very good accurate and powerful.

Passing 8.5/10 – Dembele’s passing and vision was clearly evident as basically all passes were accurate! His crossing was also very effective but isn’t so good on the receiving end with his 62 heading accuracy. Dembele’s short passing was clean and crisp however sometimes his long passing was in accurate, but in an attacking position you don’t really need to complete long passes!

Dribbling 9/10 – Dembele’s dribbling is amazing, his 99 dribbling and 97 felt very good and allowed him to get past defenders easily! However, the 91 ball control wasn’t the best, it was still good enough to not lose the ball. His composure stat of 79 isn’t that noticeable however in some situations this lets Dembele down a lot; therefore Dembele’s price is so low.

Physical 7/10 – Dembele due to his body type feels quite strong in game despite his 61 strength. The 96 stamina was good as he wasn’t tired to the end of the game. The aggression stat is not really noticeable and does not affect his play style.

Overall 8.5/10 – I would recommend buying this card because of his amazing value. However, his composure does let him down in some situations. Dembele’s key stat would be his dribbling and pace. This card is very versatile as he has very good links and then on either side of the pitch due to his 5 star weak foot!